Perspectives and Visions: One Hundred Years of Lowell's College Education

PERSPECTIVES AND VISIONS: ONE HUNDRED YEARS OF LOWELL'S COLLEGE OF EDUCATION

The term "normal" is derived from the French. Napoleon called France's schools for the preparation of secondary school teachers L'Ecole Normale Superieure.  Charles Brookes, an American education visionary who had visited Europe to study teacher preparatory programs, heard the term applied to Prussia's teacher preparatory schools.  Brooks is credited with having introduced the term to America.  The name implies a "model" to be copied and an "ideal" toward which to aim.

In Lowell, the school was built at the corner of Broadway and Wilder Street, a site selected by the State Board of Education and purchased by the City. The school opened to pupils on October 4,  1897, while the building was still in the hands of the contractors. Classes met in four rooms on the Wilder Street side of the unfinished structure.  Dedication Exercises took place on June 15, 1898, slightly over eight months after opening. Combined with the dedication was the graduation of teachers from the kindergarten class that had been received from the city training school into the Normal School at its opening.  Diplomas were presented by Mrs. Kate Gannet Wells of the State Board of Education.

"Each student had passed hours of challenging entrance examinations, written and oral, in English literature, Latin, French  or German, History, Science, Drawing, and Music.... The two-year teacher preparation course required a liberal education obtained in 'the people's college:' the nineteenth-century high school.  After passing those exams, tuition was free to residents of Massachusetts, and thirty dollars for others."
– To Enrich and To Serve

Frank F. Coburn, a strong advocate for the location of the school in Lowell and the then current principal of Lowell High School, was appointed by the State Board of Education to be the school's first principal. 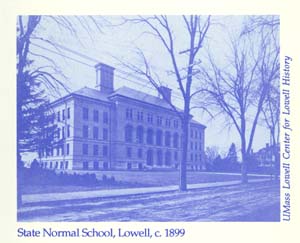 He remained in that post until 1908.  During that time academic foundations were laid, public relations established, and a genuine affection for and loyalty to the school and its mission were engendered in students, faculty, and the community.

As expressed by the State, the sole purpose of the school was the preparation of elementary school teachers for public schools in Massachusetts.  The standard course of study was two years in length, but in so far as the facilities would permit, an elective third or fourth year was available.  So too were special courses for experienced teachers and college graduates.  There was a special program for students who elected the kindergarten course. In 1910, a three-year course in music was initiated.

Conforming to State requirements, Lowell established a training school where the aspiring teachers might observe and practice their recently acquired teaching skills.  The Bartlett School, one of Lowell's newest and finest, made twenty-seven rooms available.  The principal of the school, Cyrus A. Durgin, later became the Normal School's second principal (1909-1915).  Before 1910, additional training schools began operation in Lawrence and at a rural school in North Tewksbury.

While the Normal School bore that name, two other principals presided John T. Mahoney (1916-1922) and Clarence M. Weed (1923-1931).  In 1932, the school's name was changed to State Teachers College at Lowell.  Unofficially, the school was referred to as Lowell Teachers College.  School publications  from the period bear that title, and memorabilia from that time is initialed LTC.  A beautiful stained-glass window in the entrance hall of today's Coburn Hall displays "LTC."

After the name change, Clarence M. Weed continued as the top administration under the title of president. During the Weed administration a three-year course in elementary education became standard.  Later, this was extended to four years.  In 1932, the baccalaureate degree of Bachelor of Science in Education was conferred on 18 graduates.

"Even in the era of the 'flapper,' rigorous standards of dress were still observed: skirts at mid-calf and not an inch shorter, any make-up was intolerable.  No gentleman callers were welcome.  Classes began at nine o'clock with the assembly, students seated at their desks which held their books and belongings....  There was a smoking room for male faculty only; a few women teachers puffed secretly in their private offices."

– To Enrich and To Serve

Dr. James Dugan, the fifth president (1935-1950), faced the possible closing of the institution, but rallied strong local support to help keep it open.  A delegation of prominent individuals representing Lowell's powerful pressure groups traveled to Boston and convinced State officials of  the importance of the college.  The result was that the school not only survived but continued to grow and expand.

In 1950, Dr. Daniel H. O'Leary assumed the presidency and initiated an ambitious building program.  The physical plant increased from a single building to a multi-building complex close to the old Normal School, forming an area now called the South Campus of UMass Lowell. The dedication of buildings named for six presidents was held on June 9,1974.

"O'Leary, however, had his own plans for the transformation of the teachers' college into a liberal arts institution with an education program.  He came with a vision and spent his presidency fulfilling that vision."

Dr. O'Leary strove for and attained full accreditation for the college, making a tremendous academic advance.  In 1959, the school was empowered to offer curriculum in Secondary Education.  (By 1964, programs in specialized disciplines leading to degrees in that field were in place.)  State Teachers College was renamed Massachusetts State College in 1960.   The next year a Liberal Arts degree program was offered for the first time.  Beginning in 1967, the school was authorized to confer two more degrees: Master of Education and Master of Music Education.

Lowell State College and Lowell Technological Institute merged in 1975 to become the University of Lowell, a multi-purpose institution. The roots of the former Lowell Tech stretch back to the founding of a school for textile studies in 1895. The College of Education was relocated to new campus, the West Campus, after the University acquired a tract of land in North Chelmsford. The property was the site of the old Middlesex County Training School.  The aged building, stately trees, and spacious lawns offer a restful, dignified setting, befitting the oldest Lowell foundation of the University. 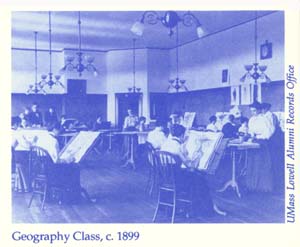 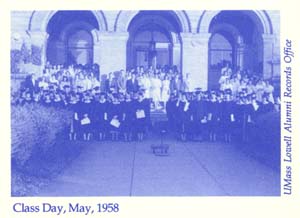 buildings on campus.  However, Richardson Hall, a large and impressive building that needs repair, is scheduled to become the permanent demonstration school.

"Perspectives and Visions: 100 Years of Lowell's College of Education" celebrates one of the community's distinguished centers of learning. Through documents, photographs, artifacts, and text, viewers will learn about the founding and evolution of the State Normal School of Lowell, whose educational mission is carried on by today's UMass Lowell College of Education. The corridor panels act as a time-line, highlighting key moments in the past 100 years.  Display cases feature subjects and periods of special interest. The main exhibit area inside the Immigrants Exhibit offers a retrospective look at the academic life and student life of the college.

This exhibit is one of many activities and events in 1994 and 1995 organized to celebrate the Centennial of the University of Massachusetts Lowell.  For a schedule of events, contact Christine A. McKenna, Coordinator of Public Information at the University.

Quotations from To Enrich and Serve: The Centennial History of the University of Massachusetts Lowell,

Please note Individuals who lent or donated items for the exhibit are acknowledged in the exhibit area. We are grateful to those who shared their photos, documents, artifacts, and other mementos with us.