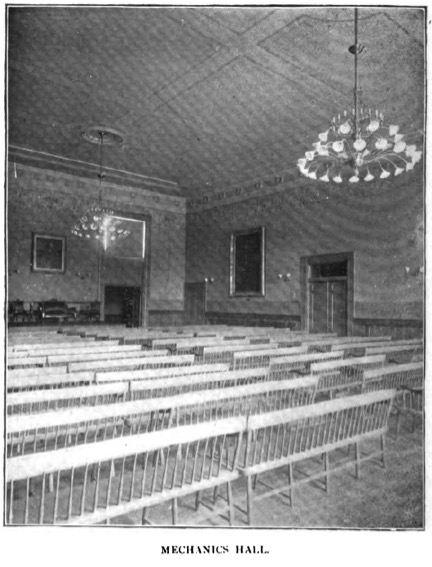 "Mechanics Hall first appears on the 1841 map, housing the Middlesex Mechanics Association. Incorporated in 1825, the Association was modeled on the Massachusetts Charitable Mechanics Association of Boston, founded thirty years previously by Paul Revere. In August, 1834 a gift of land on Dutton Street, valued at about $4,500, was deeded to the Association by the proprietors of Locks and Canals. About $7,000 was raised from private sources for the new building and influenced by Kirk Boott, the manufacturing companies donated $14,015. The building was dedicated on September 26, 1835. The Association was established as a trade guild, with provisions for the mutual support of needy members, the control of apprentices, and the encouragement of good craftsmanship; and limited its membership to mechanics, meaning thereby any person who had learned a trade. (Coburn, 1920, p. 200). However, it diverged from its original intent almost immediately, becoming "something of a Lowell analogue of the Boston Athenaeum," a clearing house of literary and scientific knowledge" (Ibid, p. 264)." https://lowellhistarch.omeka.net/items/show/371