What is Grounded Theory?

All research is "grounded" in data, but few studies produce a "grounded theory." Grounded Theory is an inductive methodology.  Although many call Grounded Theory a qualitative method, it is not.  It is a general method. It is the systematic generation of theory from systematic research.  It is a set of rigorous research procedures leading to the emergence of conceptual categories.  These concepts/categories are related to each other as a theoretical explanation of the action(s) that continually resolves the main concern of the participants in a substantive area.  Grounded Theory can be used with either qualitative or quantitative data.

What is it? From Analysing Qualitative Data by Graham R. Gibbs (2007): "Grounded theory is an inductive form of qualitative research, introduced by sociologists Barney Glaser and Anselm Strauss, where data collection and analysis are conducted together. Constant comparison and theoretical sampling are used to support the systematic discovery of theory from the data. Thus theories remain grounded in the observations rather than generated in the abstract. Sampling of cases, settings or respondents is guided by the need to test the limits of developing explanations which are constantly grounded in the data being analysed."

Strauss and Corbin (1990) suggest there are 3 stages in analysis in grounded theory: open coding, axial coding and selective coding. During open coding the researcher reads the text and identifies codes based on observations of the data (not pre-determined labels). In axial coding, the researcher identifies relationships between the data. Selective coding identifies the one core category or label that drives the rest of the data. Here, you'll consider the underlying intentions and meanings to uncover one essential concept that grounds the rest of the data. Researcher Tiffany Gallicano illustrates this process in this chart: 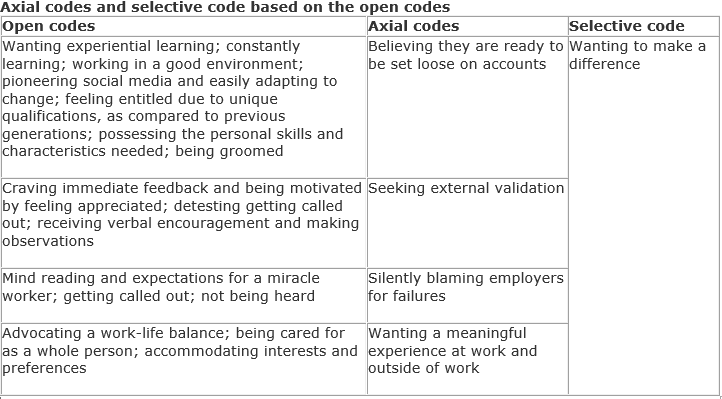 This involves various methods of constant comparison. Previously coded text also needs to be checked to see if the new codes created are relevant. Constant comparison is a central part of grounded theory. Newly gathered data are continually compared with previously collected data and coding in order to refine the development of theoretical categories. The purpose is to test emerging ideas that might take the research in new and fruitful directions.

Another approach used in grounded theory is line-by-line coding, which literally means coding each line of an interview. This approach is intended to keep the researcher close to the data while forcing them to be analytical. The researcher must think carefully about what the person being interviewed is literally saying and also consider the meaning behind the statements. Line-by-line coding is intended to prevent a researcher's analysis from being influenced by preconceived ideas or mere acceptance of the interviewee's point of view.

Cummings, Jorden A.Child Abuse & Neglect; Oxford Vol. 76,  (Feb 2018): 117.
Child interpersonal trauma is associated with a host of negative outcomes, both concurrently and in adulthood. Parental responses following trauma can play an important role in modulating child responses, symptoms, and post-trauma functioning. However, parents themselves are also impacted after their child experiences trauma, reporting distress, psychopathology, concerns about the child's safety, changes in discipline and protectiveness, and feelings of blame. Most of this previous research, however, suffers from methodological limitations such as focusing on description and correlations, providing static "one shot" assessments of parenting after trauma, and relying mainly on results related to child sexual abuse. This project developed a comprehensive, explanatory theory of the dynamic process by which parenting changes in response to a range of child trauma, using a sample of parents whose children had experienced a range of interpersonal trauma types. Grounded theory analyses revealed a three-phase dynamic model of discontinuous transformation, in which parents experienced destabilization, recalibration, and re-stabilization of parenting practices in response to child trauma. Parents were focused on Protecting and Healing the child victim, often at the expense of their own needs. Most parents reached a phase of posttraumatic growth, labelled Thriving Recovery, but processes that hindered this recovery are also discussed. This study provides the first evidence that dynamic systems of change as well as vicarious posttraumatic growth can apply to parents of child trauma victims. Generating an explanatory theory provides important avenues for future research as well as interventions and services aimed at families who have experienced child trauma.

Veteran identity as a protective factor: A grounded theory comparison of perceptions of self, illness, and treatment among veterans and non-veterans with schizophrenia

Firmin, Ruth L.; Luther, Lauren; Lysaker, Paul H.; Salyers, Michelle P..American Journal of Psychiatric Rehabilitation; Evanston Vol. 19, Iss. 4,  (Oct-Dec 2016): 294-314.DOI:10.1080/15487768.2016.1231642
For individuals with severe mental illness, relatively little is known about the impact of a veteran role identity. Consequently, this article investigates whether veterans (n = 20) and non-veterans (n = 26) with schizophrenia differ in their perceptions of self, illness, or treatment. Participants completed an audiotaped, semistructured interview that was transcribed and coded using modified grounded theory. Veterans were more likely than non-veterans to discuss the following themes: (1) wanting to be "normal," (2) having a military mindset, (3) being optimistic toward the future, (4) resisting stigma, and (5) having active treatment attitudes. Findings support the theory that identifying as a veteran has several protective factors that might help shape self-perception and thereby responses to stigma, attitudes toward treatment, and hope for the future.

Disembedding the Traditional Family: Grounded Theory and the Study of Family Change among Mangor and Gaverk Tribes of Iranian Kurdistan

Mohammadpur, Ahmad.Journal of Comparative Family Studies; Calgary Vol. 44, Iss. 1,  (Jan/Feb 2013): 117-XI.
The aim of this article is to explore the meaning of family changes among Mangor and Gaverk tribes of Mahabad Township in Iranian Kurdistan. The interpretive paradigm provided the conceptual framework used to explain various aspects of the inquiry. Data were collected and analyzed, using Grounded Theory methodology. Seven main categories and supporting factors were identified during analysis. These include: the traditional family, modernization, enculturation, detraditionalization, empowerment, and the modernized family. The core category constructed during selective coding was conceptualized as a process of Disembedding the Traditional Family. This category captures the nature of family changes and pulls together all of the other main categories. According to this category, the people of the region interpret family changes in their community as relative the traditional family structure has been replaced with a new family structure and functions. The results are represented in a conceptual model consisting of conditions, interactions, and consequences arranged around the core category.
OPTIONAL additional reading on Coding